CORONAVIRUS UPDATE: All library locations are closed until further notice, but we are here to support you. 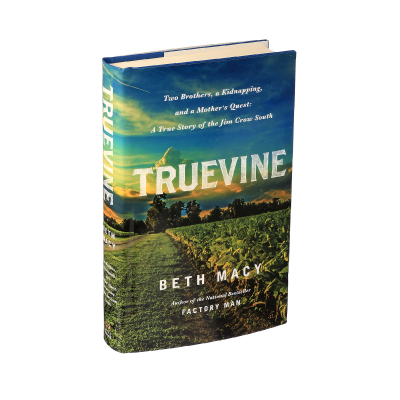 Truevine : Two Brothers, A Kidnapping, and a Mother’s Quest : a true story of the Jim Crow South, by Beth Macy (NY: Little, Brown and Company, 2016)

“Their world was so blindingly white that the brothers had to squint to keep from crying. On a clear day, it hurt just to open their eyes. They blinked constantly, trying to make out the hazy objects in front of them, their brows furrowed and their eyes darting from side to side…”

So begins Beth Macy’s story of the brothers George and Willie Muse, African-American albino children just nine and six years old, working with their mother in the tobacco fields outside the small Virginia town of Truevine.  The legend was that they were lured away by a white man who then exhibited them as sideshow “freaks” in a traveling circus.

The year was 1899, in the Jim Crow era described in Douglas A. Blackmon’s Slavery by Another Name (see my review). Southern blacks were prevented from owning land, obtaining an education, and voting. Whites arrested African American men for spurious charges and used them for forced labor under cruel conditions. In that period, bounty hunters across the country looked in small towns and backwoods for people they could use in “the Hollywood of that era: the circus.” Some circus managers maintain that sideshow people volunteered to join, and that the circus gave jobs, glamor, and world travel to people who were otherwise unable to work. Others were sold, during hard times, by their families. Macy explores the many shades of this issue, delving into both the exploitation and the opportunities of the circus venue.

Astounding to circus-goers for their African features, white skin, and blonde hair in dreadlocks, the brothers were shown as the “Sheep-Headed Men,” “Eko and Iko, the Monkey Men,” and so on, from Madagascar, the South African bush, or wherever the brothers’ managers imagined. Their show names were changed frequently, and they were traded and sold to different companies, making them harder to trace. Like many kidnapping victims, George and Willie were told their mother was dead; the repetition made the young, dependent boys believe it.

Meanwhile, their mother Harriet Muse never stopped searching for them, calling social service organizations, scanning crowds at circuses and even taking out notices in Billboard. Her persistence won out in a reunion that literally stopped the show, and she stood up to the circus manager and the police to get her sons back. Amazingly for the time, she hired a lawyer and eventually won back pay and better treatment for her boys, enough to provide a home for her (exceedingly rare at the time for African American women) and retirement security and medical care for George and Willie.

"Truevine" is a journey back to the time before our sensibilities about disabled and different people were raised, back to a time when humans were bought and sold and shown for our entertainment. In exploring the life stories of George, Willie, and Harriet Muse, Macy opens our eyes to their intelligence, love and courage in spite of almost impossible odds.