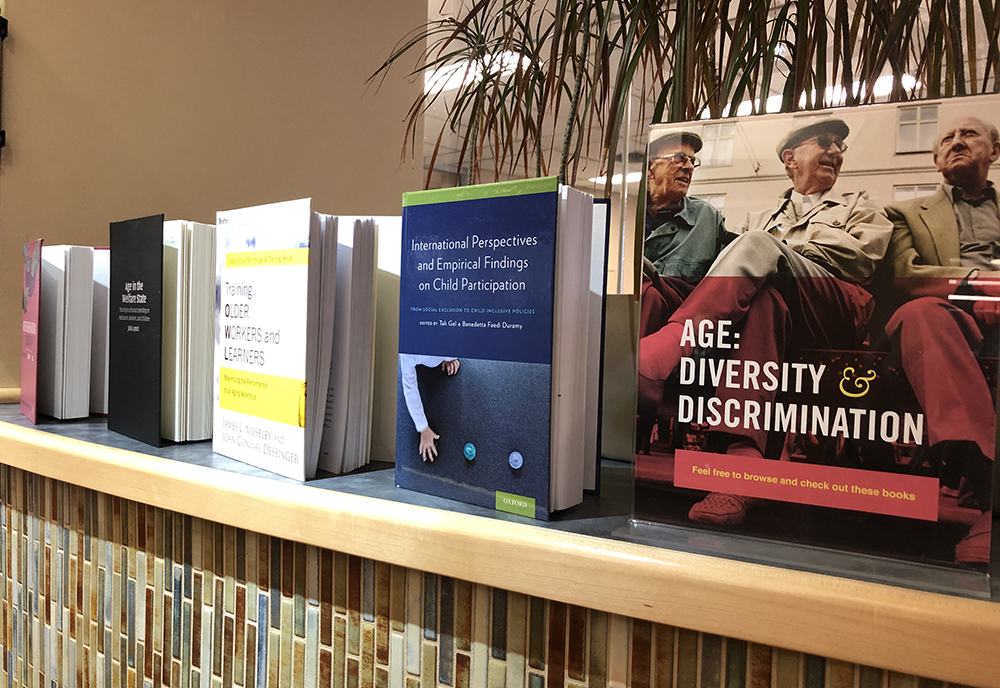 The Age Discrimination in Employment Act of 1967 (ADEA) was designed to protect job applicants and employees over the age of 40 from discrimination on the basis of age in hiring, promotion, discharge, compensation, or terms and conditions of employment. Enforced by the Equal Employment Opportunity Commission, the ADEA was the first of its kind in the U.S. and is still in effect.

A physical book display is now available at the Libraries with the selection rotating weekly. Some of the eBooks listed below also have a physical listing. Please check the availability.

Special thanks to our Materials Processing Coordinator, Leah Zande, for compiling this list. 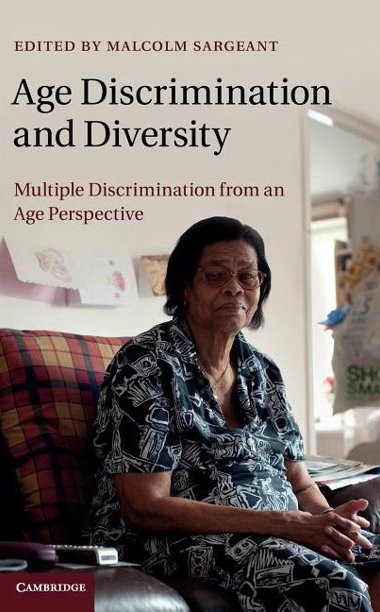 This volume of essays is concerned with the discrimination against older people that results from a failure to recognise their diversity. By considering the unique combinations of discrimination that arise from the interrelationship of age and gender, pensions, ethnicity, sexual orientation, socio-economic class and disability, the contributors demonstrate that the discrimination suffered is multiple in nature. It is the combination of these characteristics that leads to the need for more complex ways of tackling age discrimination. 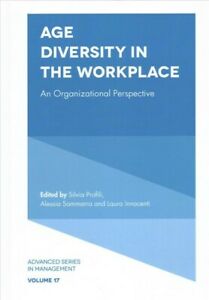 The volume is divided into two parts. Contributions in the first section raise questions about the meanings of age and age diversity, as well as how and when age matters in organisations. The second part of the book examines the role and contributionof HR practices in forging an age-inclusive workplace. 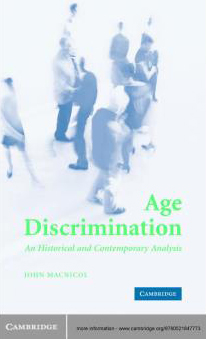 Age discrimination is a highly topical issue in all industrialised societies, against a background of concerns about shortening working lives and ageing populations in the future. Based upon detailed research, and adopting an interdisciplinary approach, this unique study traces the history of the age discrimination debate in Britain and the USA since the 1930s. It critically analyses the concepts of ageism in social relations and age discrimination in employment. Case-studies on generational equity and health care rationing by age are followed by an analysis of the British government's initiatives against age discrimination in employment. The book then traces the history of the debate on health status and old age, addressing the question of whether working capacity has improved sufficiently to justify calls to delay retirement and extend working lives. It concludes with a detailed examination of the origins and subsequent working of the USA's 1967 Age Discrimination in Employment Act. 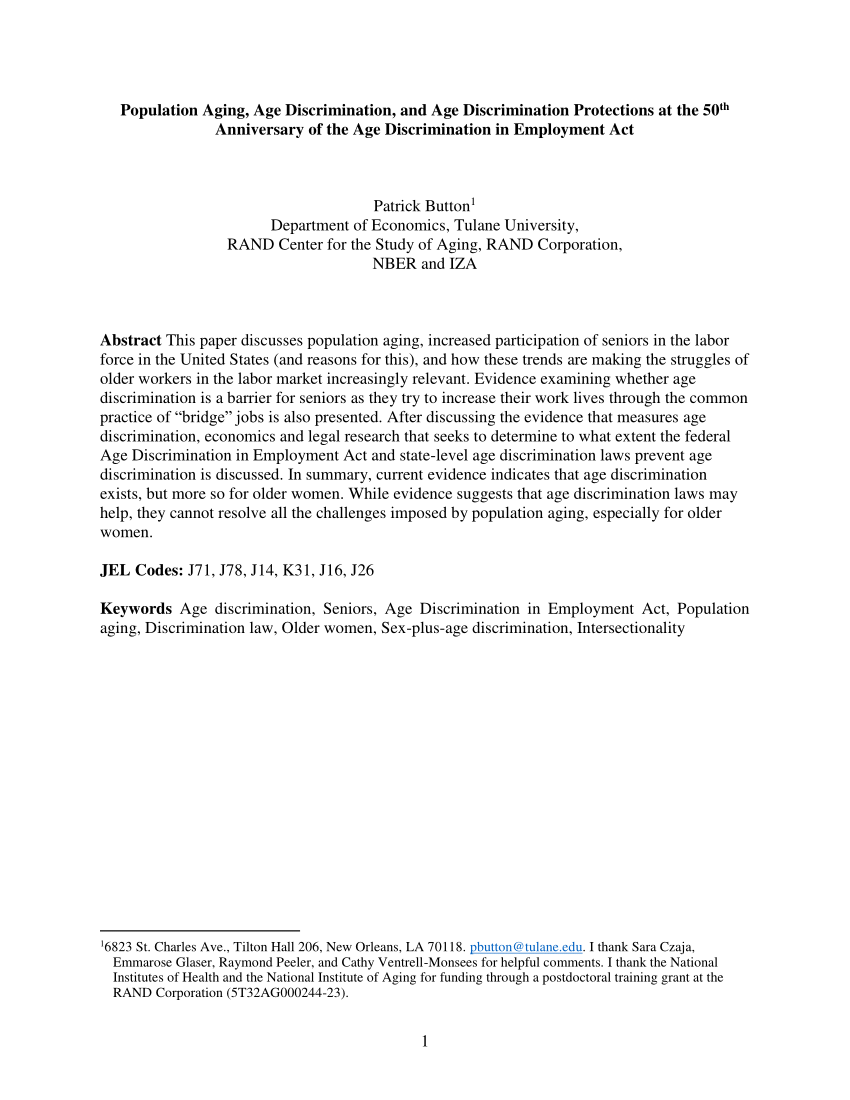 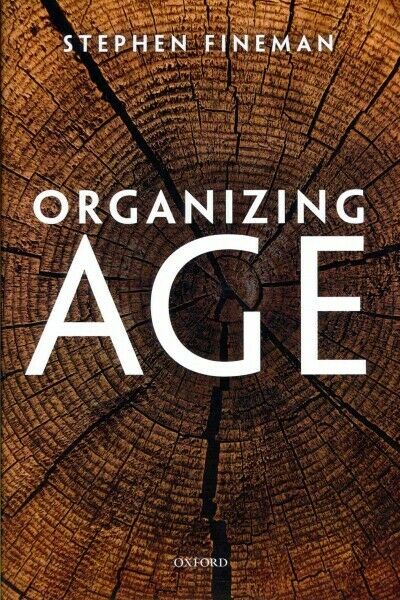 Drawing on a range of social scientific and popular writings, this book casts a critical eye over the social construction and politicization of age in and beyond organizations. Amongst other topics, it discusses: the historical roots of age in society; how we "perform" our age in different settings; the social impact of defining age groups as generations; ageism; the effect of an age-cluster on an organization's processes and members' experience; the rituals of retirement and the birth of the retirement industry; the impact of economic recession in challenging some of our assumptions about age; and the increasing politicization of the growing "grey" population. Organizing Age provides an accessible introduction to the current and emerging themes around this topic, which will be an invaluable resource for students, academics, and policy makers. 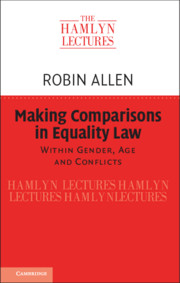 This book seeks to rebalance the relationship between comparison and justification to achieve more effective equality and non-discrimination law. As one of the most distinguished equality lawyers of his generation, having appeared in over 40 cases in the House of Lords and the Supreme Court and many leading cases in the Court of Justice, Robin Allen QC is well placed to explore this critical issue. He shows how the principle of equality is nothing if not founded on apt comparisons. By examining the changing way men and women's work has been compared over the last 100 years he shows the importance of understanding the framework for comparison. With these insights, he addresses contemporary problems of age discrimination and conflict of equality rights.

Discrimination at the Intersection of Age, Race, and Gender: Evidence from a Lab-in-the-Field Experiment
Lahey, Joanna (2018) 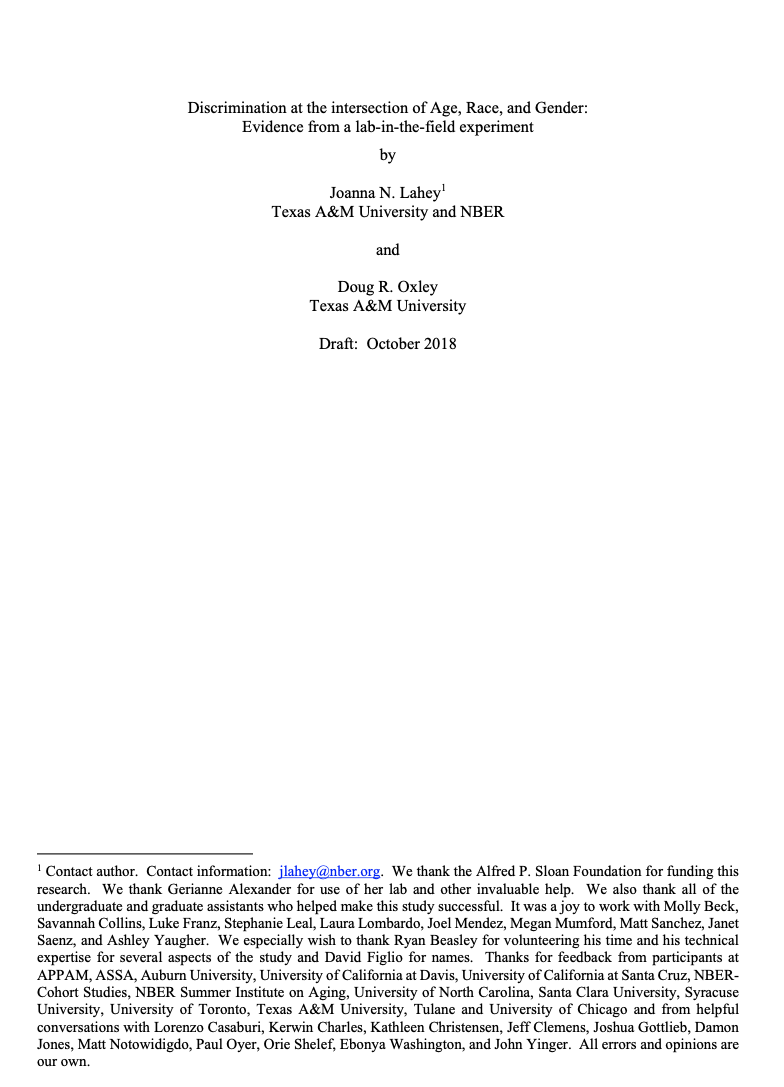 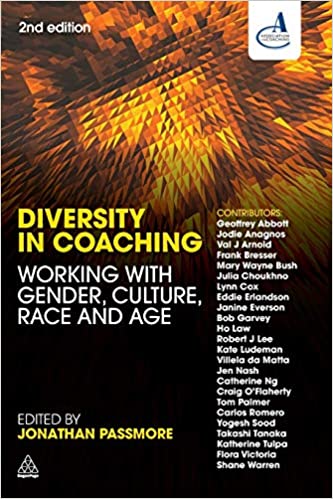 Written by an international team of 21 coaching professionals from 10 countries, Diversity in Coaching provides guidance on understanding diversity and on adapting coaching styles and techniques to meet individual needs, local demands and cultural preferences. The contributors, including Mary Wayne Bush, Director of Research at the Foundation for Coaching, and Eddie Erlandson and Kate Ludeman of Work Ethic Corporation, look at how coaches can respond to issues of gender, generational, cultural, national and racial difference. 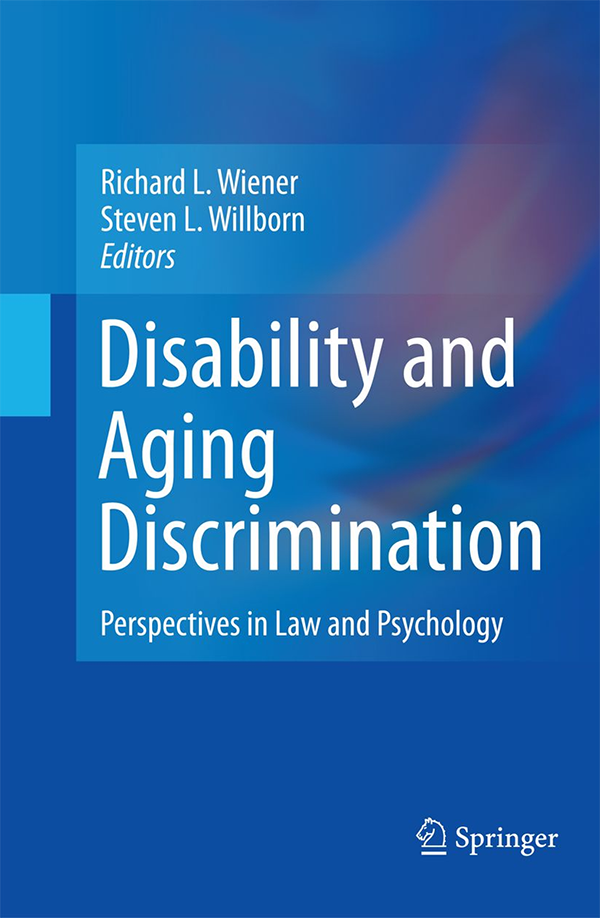 Two things are certain in the contemporary workplace: the aging of employees, and negative attitudes toward them—especially those with disabilities—by younger colleagues and supervisors. Yet related phenomena seem less clear: how do negative stereotypes contribute to discrimination on the job? And how are these stereotypes perceived in legal proceedings? Bringing theoretical organization to an often unfocused literature, Disability and Aging Discrimination offers research in these areas at the same level of rigor as research into racial and gender discrimination. The book applies Social Analytic Jurisprudence, a framework for testing legal assumptions regarding behavior, and identifies controversies and knowledge gaps in age-discrimination and disability law. Chapters provide historical background or present-day context for the prevalence of age and disability prejudices, and shed light on the psychosocial concepts that must be understood, in addition to medical considerations, to make improvements in legal standards and workplace policy. 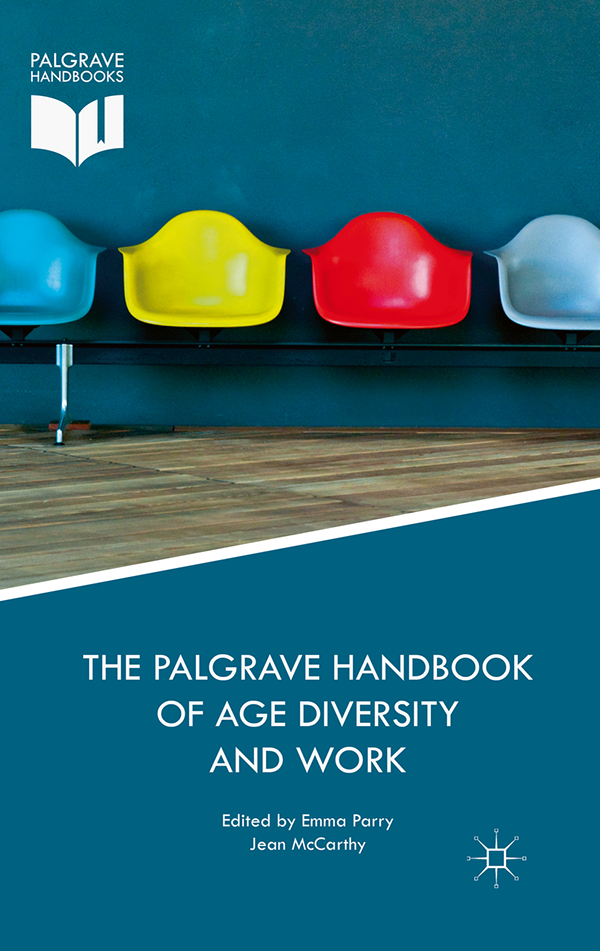 This Handbook incorporates a variety of disciplines and approaches in order to provide a comprehensive and authoritative examination of the issues that result from increasing age diversity at work. Despite interest in this area exploding over the past few years amongst academics, practitioners and policy makers, the analysis of age diversity has remained primarily within disciplinary ‘silos’ such as Psychology or Sociology with a focus on ageing or generational differences, rather than a combination of approaches to understanding age diversity. Unique in its coverage of multiple perspectives, it considers not only generational and ageing perspectives to age diversity, but also highlights the importance of context in driving both the impact and response to this issue. The Palgrave Handbook of Age Diversity and Work includes contributions from leading scholars in age and generational diversity from across the world, discussing cutting-edge research findings about the nature and impact of age diversity and presenting approaches to managing this phenomenon. 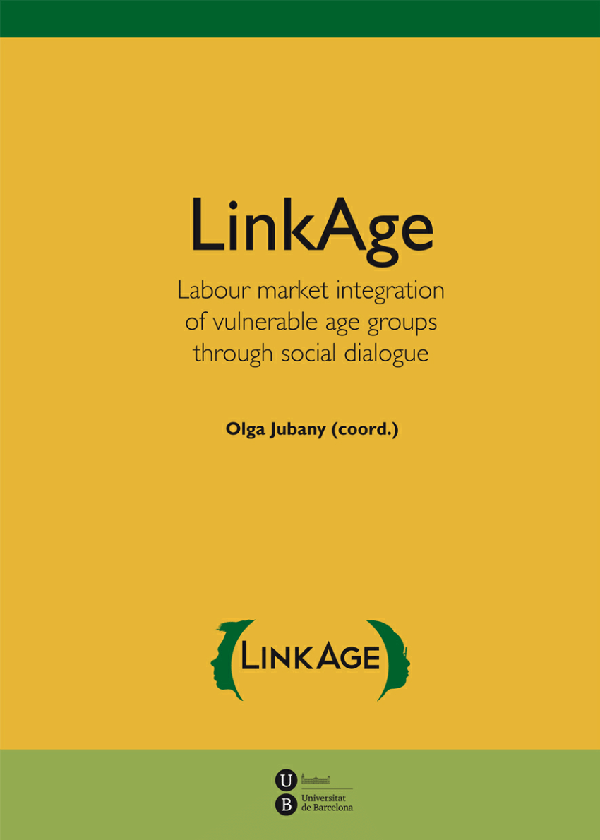 The current intersection of long-term economic restructuring and demographic adjustments across Europe has produced major patterns of inequality in the labour market, with a distinctly uneven impact depending on the age of workers. The dismissal of older workers and the blockage of occupational integration of youngsters have led to a dramatic decline of labour market participation at both ends of the age spectrum; a context in which trade unions have become a vital inclusive instrument. LinkAge analyses the extent to which social dialogue represents the interests of younger and older workers in a mapping of six European countries, addressing challenging questions such as: What is the impact of welfare retrenchment policies for these workers? Is a zero-sum approach applied as a cost-distribution strategy? and What are unions’ approaches to tackle age discrimination? Relying on the ethnographic insights from workers, experts, trade unions and employers’ representatives, the research explores the effects of demographic and intergenerational dynamics on the working population, and society as a whole. 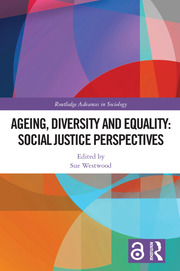 Current understandings of ageing and diversity are impoverished in three main ways. Firstly, with regards to thinking about what inequalities operate in later life there has been an excessive preoccupation with economic resources. On the other hand, less attention has been paid to cultural norms and values, other resources, wider social processes, political participation and community engagement. Secondly, in terms of thinking about the ‘who’ of inequality, this has so far been limited to a very narrow range of minority populations. Finally, when considering the ‘how’ of inequality, social gerontology’s theoretical analyses remain under-developed. The overall effect of these issues is that social gerontology remains deeply embedded in normative assumptions which serve to exclude a wide range of older people. This book aims to challenge and provoke the above described normativity and offer an alternative approach which highlights the heterogeneity and diversity of ageing. 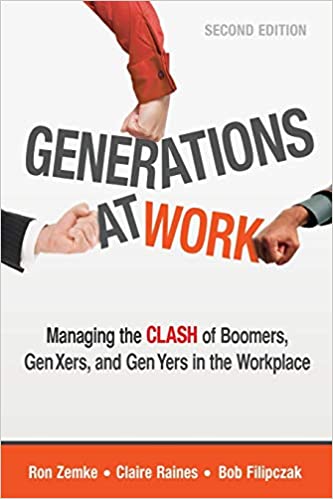 Written for all who are struggling to manage a workforce with often incompatible ethics, values, and working styles, Generations at Work looks afresh at the root causes of professional conflict and offers practical guidelines for navigating multigenerational differences. By laying bare the most common causes of conflict--including the Me Generation’s frustration with Gen Yers’ constant desire for feedback and the challenges facing Gen Xers sandwiched between these polarities--the book offers practical, spot-on guidance for managing the differences with consideration to each generation’s unique needs.Along with the authors’ insights for managing a workforce with different ways of working, communicating, and thinking, the book offers in-depth interviews with members of each generation, tips on best practices from companies successfully bridging the generation gap, and a mentorship field guide to help you support the youngest members of your team--tools, which are the key to helping your workforce interact more positively with one another and thrive in today’s wildly divergent workplace culture.