When They Call You a Terrorist 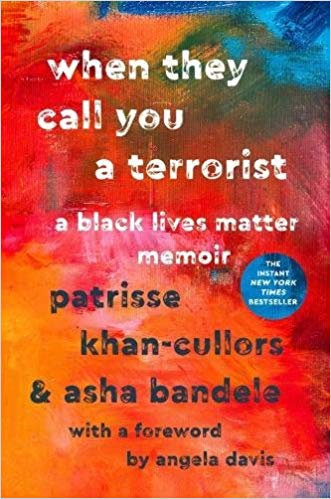 With the killing of unarmed African American men and women in the news so often, it seems the hashtag and movement of Black Lives Matter just evolved. This memoir shows us the events in the life of Patrisse Khan-Cullors that inspired her, along with Alicia Garza and Opal Tometi, to take action, organize and protest the killings.

From her childhood and early teen experiences in different schools, Khan-Cullors saw firsthand the differences in punishing Black and white children. She describes 'the extraordinary presence of police in our communities … despite our never using or selling drugs more than unpoliced white children,' resulting in the criminalization of Black children. She writes, 'For us, law enforcement had nothing to do with protecting and serving, but controlling and containing the movement of children who had been labeled super-predators simply by virtue of who they were born to and where they were born.' She mentions the terrible videos of Black girls being thrown out of their seats and beaten by 'School Safety Officers;' the killing of Tamir Rice at twelve years old; the police descriptions of gang behaviors that are 'written so broadly that even members of Congress could have been arrested.'

The war on drugs and its resulting increase of incarcerated Black and Latino men evolved into another civil rights crisis, one that Khan-Cullors experienced personally when her father went to prison. Police also arrested and imprisoned her brother, a big man who had undiagnosed schizophrenia and acted erratically. 'There are more people with mental health disorders in prison than in all of the psychiatric hospitals in the United States,' she says. The abuse and deterioration her brother suffered are heartbreaking and
enraging. Meanwhile, Khan-Cullors' mother had to work two and three jobs to provide for the family.

Throughout her memoir, the author shows how political issues of race, class, dis/ability, sexuality and religion directly affect her family. Exposed to activism in her liberal arts high school, she learned how to organize protests and find alliances. She came out as Queer with strong support from her friends, some of whom were disowned by their parents. She learned 'this is what it means to be young and Queer: You can do nothing wrong whatsoever, you can just be alive and yourself, and that is enough to have the whole of
your life smashed to the ground and swept away. And all you can do is watch.' Khan-Cullors' relationships change during the course of the book, and she writes about each member of her 'chosen family' with affection and respect. She describes her spiritual journey from her Jehovah's Witness upbringing through her questioning and explorations and eventually to a degree in religious studies.

So many issues weave through this small book – addiction and 12-step recovery programs that stress personal responsibility instead of poverty and oppression; Queer visibility and freedom; racial profiling and police brutality; the school-to-prison pipeline and the effects of mass incarceration on Black and Latinx communities, and more. Political slogans are always born out of personal experiences, and Black Lives Matter is no exception. When They Call You a Terrorist shows the lives behind the hashtag, and shows why they matter.