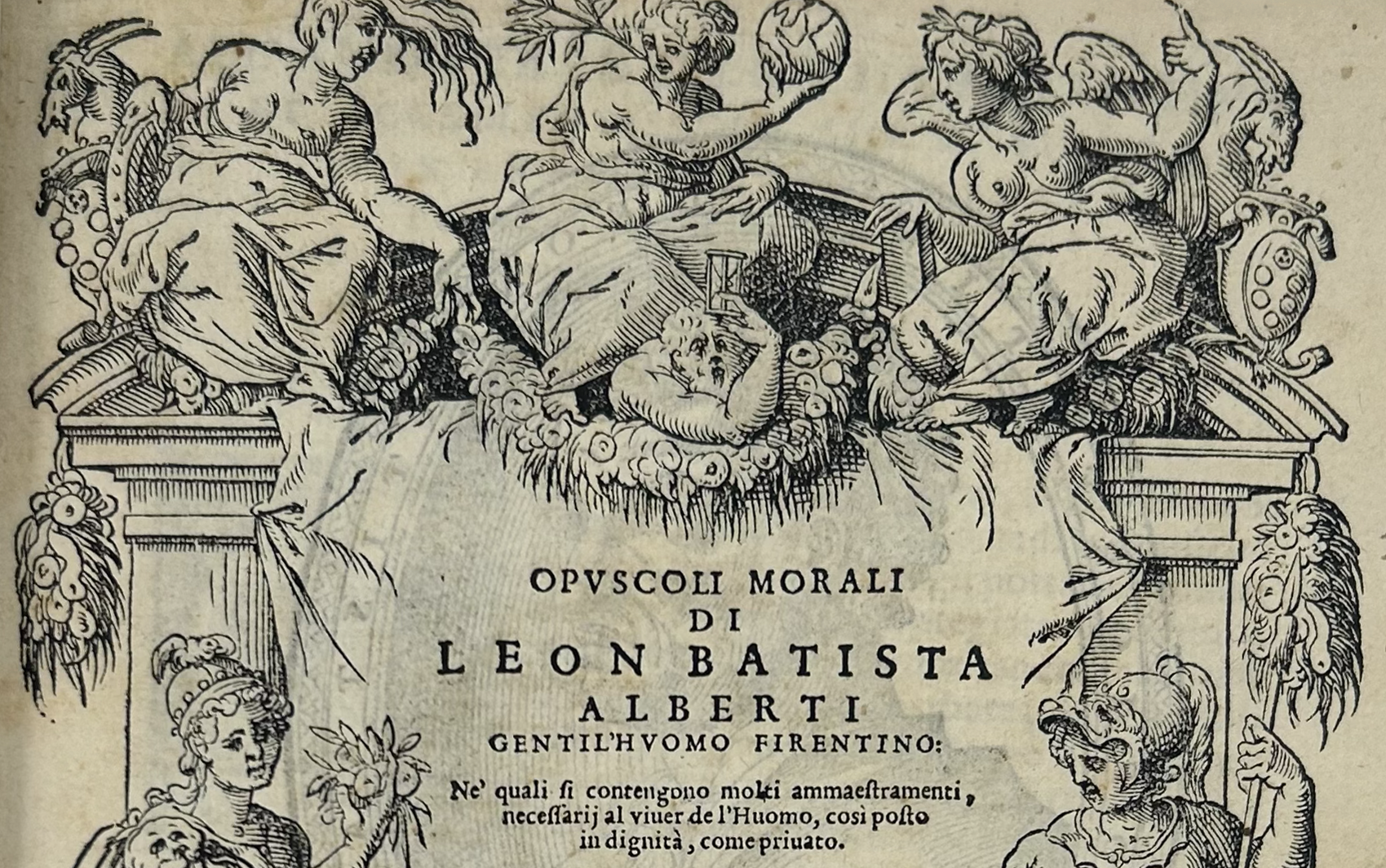 Cryptography, like any science or art, has a long and complex history. This history is preserved in books, many of which are as yet scantly studied. Special Collections at CMU Libraries curates this history and regularly acquires artifacts and early printed books that illustrate early cryptographic systems. This month the Libraries acquired a copy of Leon Battista Alberti’s posthumously published Opuscoli Morali, which includes a short work on ciphers and cryptanalysis, “La Cifra”, commissioned by papal secretary Leonardo Dati in 1466 or 7. La Cifra (De componendis Cifris [On Devising Ciphers], in Latin) is recognized as the first western treatise on cryptography and, according to Arielle Saiber, “one of the earliest treatises on coding” (Measured Words: Computation and Writing in Renaissance Italy, 2017, 22). Printed in Venice in 1568 — a century after Alberti wrote it — the Opuscoli also contains Alberti’s works on mathematical perspective, family life, architecture, and morality (hence the collection’s name). Reflecting Alberti’s intellectual range, the Opuscoli also includes a short treatise on the house fly. 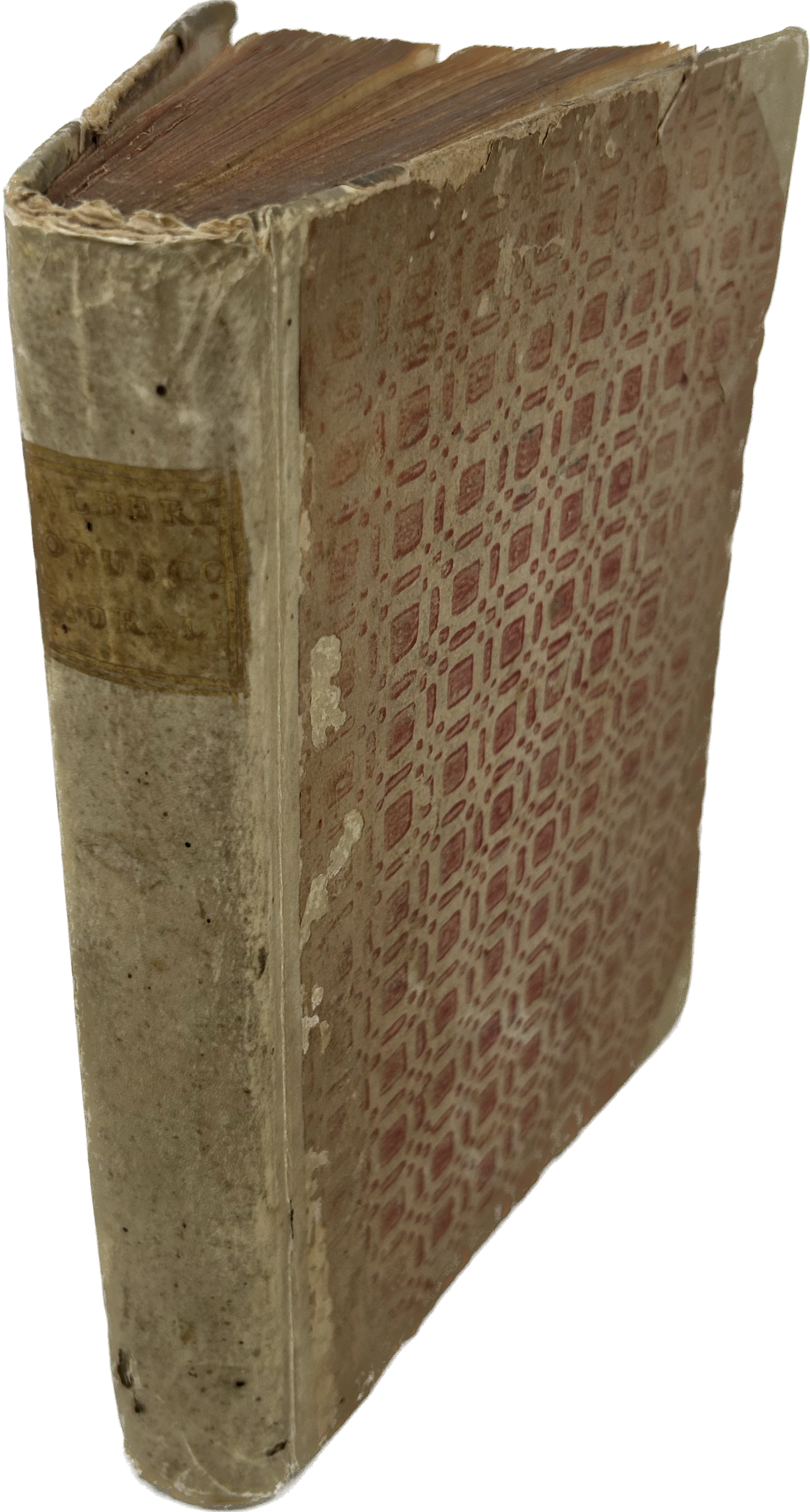 CMU’s copy of Alberti’s Opuscoli — acquired in part with the help of contributions to the Libraries’ Special Collections Acquisitions Fund received in November — is bound in vellum (a type of treated animal skin, usually cow) over patterned printed paper (figure 1). Its title page bears a short inscription across the decorative frame of the frontispiece. Though this appears at first glance to be a mark of ownership, it is more likely an attribution for the design of the woodcut frame (figure 2). The inscription reads, “Ottavio Lion [Leoni] detto il Padovanino.” Though I can’t confirm the attribution, it is not without interest: Ottavio Leoni, an accomplished portraitist and printmaker, was a friend of Caravaggio. The copy is otherwise devoid of annotations, though one reader marked a section of Alberti’s satiric work Momus with a large manicule, or hand, indicating a moment of wit or wisdom to which the reader perhaps intended to return (figure 3).

Alberti (1404-1472), himself a cipher of Renaissance culture — architect, athlete, poet, mathematician — invented polyalphabetic substitution, a method of encryption that involves two or more cipher alphabets. It was in La Cifra that Alberti first outlined this method. Though concerned primarily with techniques of encrypting information, La Cifra also details decryption techniques, including frequency analysis — a trick of statistical cryptanalysis based on the most (or least) frequently recurrent letters in a particular language. This knowledge assists in decryption by enabling a kind of orthographic elimination: if you can show that a particular letter recurs more frequently than any other in an enciphered message, that character likely disguises the most common letter in the language of the original message.

Alberti’s invention of polyalphabeticity, a thorny word denoting cipher systems that use multiple alphabets, was merely a refinement on simple, static substitution, by which each letter in a plaintext message is enciphered or masked behind another: G always representing A, for instance. Alberti revolutionized such systems by making them dynamic, meaning that previously fixed correspondences between plain- and cipher text letters changed at either regular or erratic intervals. In such a polyalphabetic system, while A might first be encoded as G, in its next appearance it would be encoded as another letter (or symbol) entirely, making decryption exceedingly difficult. This represented a natural, if not entirely predictable, evolution toward complexity in cryptographic systems that would go on to inform later refinements and innovations well into the twentieth century.

What made, or makes, Alberti’s cipher system unique and groundbreaking, in my opinion, is its reliance on a mechanical instrument designed to assist in encryption and decryption. This instrument comprised two wheels that rotated around a shared axis. In La Cifra, Alberti describes the instrument in a way that suggests the object was not, at the time of his writing, theoretical, but rather a functioning thing that had been put into practice:

“I make two circles out of copper plates. One, the larger, is called stationary [fermo], the smaller is called movable [mobile]. The diameter of the stationary plate is one-ninth greater than that of the movable plate.”

A printed representation of Alberti’s instrument appears alongside its written description (figure 4), though only the outer, stationary alphabet is shown. The absent movable disk might have been supplied by the reader and used as a volvelle — a rotating disc of paper that would function as a paper-and-string cipher disc (about which, see my digital exhibition on cipher discs).

The absence of a copy of Alberti's treatise on cipher systems in Special Collections represented a significant gap in our holdings. So as Special Collections works to build a comprehensive collection of objects and books documenting the history of cryptography, the acquisition of this book establishes a new point of origin. While (many) gaps remain, the collection now runs from Alberti to the Enigma machine, a WWII-era device used by the Nazi military to encode sensitive information. These objects represent two points in a fascinating genealogy that traces 500 years of mechanical encryption and humanity’s interest in disguising information.

Special Collections is open by appointment to researchers, students, and visiting classes.