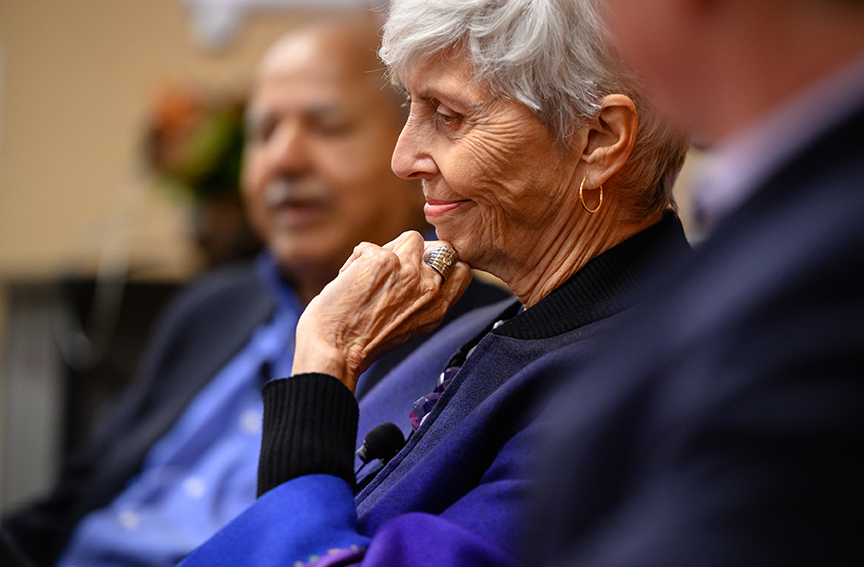 As scientists laid the foundations of artificial intelligence, Pamela McCorduck was there.

The inquisitive, kind, gracious and open-minded woman soaked up the beginnings of modern technology through conversations and interactions with the researchers shaping the field.

McCorduck, an author who wrote some of the first novels and histories about AI and was a generous friend of Carnegie Mellon University, died October 18. She was 80.

McCorduck described herself as an eyewitness to the birth and growth of AI. She was possibly best known for her 1979 book, "Machines Who Think," which chronicles the history of AI from the dreams and nightmares of ancient poets and prophets to the scientific discoveries of the 20th century. The novel contains the famous quote, “Artificial intelligence began with the ancient wish to forge the gods.”

“I think her life was shaped by curiosity,” said Lee Marona, McCorduck’s brother-in-law. “Being in the world of all of these incredible scientists, she had endless thoughts and questions, and each question with Pamela seemed to garner another question, to dig deeper.”

McCorduck’s encounters with computer scientists began in the 1960s at Stanford. There, she worked alongside Edward Feigenbaum, who earned his bachelor's degree and Ph.D. from CMU and would go on to receive the ACM Turing Award, considered the Nobel Prize of computing, and be known as the father of expert systems. McCorduck co-authored "The Fifth Generation" with Feigenbaum in 1983. Feigenbaum regarded McCorduck as one of three deep friendships he had sustained from those days.

“Now I have only two,” Feigenbaum said. “This is a deep personal loss. It is also a big loss for the AI community. Until recently, she continued to be a bridge between AI and the humanities.”

Raj Reddy, a pioneer in robotics, artificial intelligence and speech recognition and Turing Award winner, met McCorduck when he was a graduate student at Stanford. She was gracious and friendly, Reddy said, but he didn’t know at the time she was an aspiring author.

“Her books on AI turned out to be popular and widely cited,” said Reddy, CMU's Moza Bint Nasser University Professor of Computer Science and Robotics, the founding director of the university’s Robotics Institute and a former dean of the School of Computer Science. “Many encountered AI for the first time through her writings, and she influenced what people thought about the field as it was developing.”

McCorduck lived in Pittsburgh in the 1970s and taught in the University of Pittsburgh's English Department. Her husband, Joseph Traub, was the second head of the Computer Science Department — then part of the Mellon College of Science.

During her time in Pittsburgh, McCorduck came to know many of the researchers working in computer science at Carnegie Mellon. She often told a story of enticing Herbert Simon, a founder of computer science at CMU and of artificial intelligence, to stop on his walk home from campus by offering him sherry. The story was captured in the University Archives’ recording of McCorduck’s Oral History.

"Pamela was around Carnegie Mellon during a formative period of our Computer Science Department and computer science in general," said Martial Hebert, the current dean of the School of Computer Science. “She was an early and hugely influential chronicler of artificial intelligence at CMU and elsewhere, and her writing — including direct conversations with many of the giants of the field — helped define the way we view, in her words, machines who think."

McCorduck left Pittsburgh in 1979 when Traub went to New York to start the computer science program at Columbia University. The pair, however, remained connected to and good friends of CMU throughout their lives.

Upon completion of the oral history interviews conducted with researchers involved in AI for "Machines Who Think," McCorduck donated the transcripts, research and related materials to the University Archives in 1978. CMU's Pamela McCorduck Collection includes audio cassettes of interviews with notable researchers such as Simon and Allen Newell. University Libraries featured highlights from the collection in its 2018 exhibit that celebrated McCorduck's work and her contributions to the history of AI, “Shoots of Green: Innovation at CMU.” Traub also donated his papers to the archives in 2004.

In 2018, McCorduck gave CMU letters, books and other writings by Traub; rare books by 19th century mathematician and computer pioneer Charles Babbage; and more than 50 mechanical calculators, encryption devices, and early computers from the collection she and her husband had amassed. The collection contained slide rules, a Power Mac G4 Cube and a pair of Enigma machines — encryption devices used by the German military to keep secrets safe during WWII. Thousands of Enigma machines were made during the war, but only about 350 are thought to survive. The pair in the Traub-McCorduck Collection are among the 70 or so on display in museums or institutions around the world.

“The University Libraries and Archives have benefited generously from Pamela’s and Joe’s support,” said Dean of Libraries and Director of Emerging and Integrative Media Initiatives Keith Webster. “Their collections will inspire and impact CMU students and researchers for years to come, just as 'The Fifth Generation' influenced the trajectory of my career when a professor handed it to me in 1984.”

CMU’s ETC Press published McCorduck’s final book, her memoir, "This Could Be Important," in 2019.