Hear from Some of the Greatest Minds in Computer Science 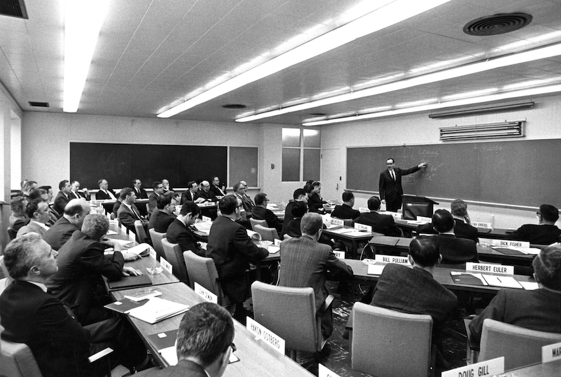 Have you ever wondered what it would be like to sit in a lecture from Nobel Prize winner, Turing Award recipient, and artificial intelligence expert Herb Simon? Attendees at the June 11 event "The Power of Pioneers: Preserving CMU's Computer Science Videotape Collection," hosted by the University Libraries and the School of Computer science, had the opportunity to do exactly that, thanks to a vintage recording that has recently been digitized.

Captured between 1970 and 1993, these videotapes feature compelling and candid lectures, discussions and classes led by Carnegie Mellon faculty — many prior to the formation of SCS — from academic departments such as mathematics, engineering and psychology. Other speakers include computer science pioneers from peer institutions and private industry. Unique to CMU, the tapes serve as the primary record of conversations that would eventually shape nearly every aspect of modern life. Sadly, without urgent action we could lose these artifacts. Recorded on a variety of early and obsolete formats, they are rapidly deteriorating, and replaying these videos to digitize them is becoming less reliable. Inaction will result in the loss of this irreplaceable collection.

At the event, CMU archivists Katherine Barbera and Emily Davis spoke about the history, discovery, and plans for preserving these precious tapes. Viewers also heard from alumnus and founding member of Pixar, Ralph Guggenheim, who experienced both sides of the camera during his years on campus in the 1970's and 1980's.

View a recording of the event. Additional vintage lectures can be viewed on the University Archives' Vimeo Channel.