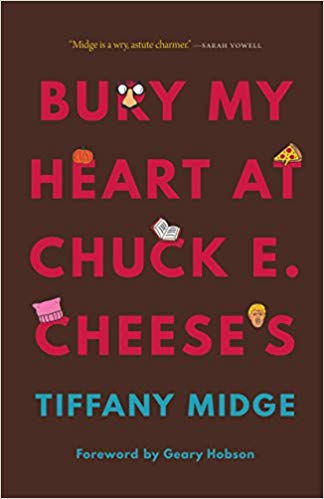 Reaching to catalog Tiffany Midge's book, I was shocked at the parody of "Bury My Heart at Wounded Knee" until I realized Midge was Native American. My reaction proves what Geary Hobson says in his introduction, that white readers assume a writer is white until we learn otherwise, and that whites are largely ignorant of the rich culture of Native humor.

There's also an expectation on the part of white readers that writers of color explain themselves. Midge doesn't waste time in her essays explaining the Trail of Tears or the Idle No More anti-pipeline movement; she moves quickly into satire and expects a reader to keep up. The results of this are even funnier, as her essay describing 'Thousands of Jingle Dress Dancers Magically Appear at Standing Rock Protector Site' is taken seriously and goes viral on the day of the 2016 election results.

Midge captured me from the opening essay, describing the day she took her mother to receive a fatal diagnosis and their reaction of heartbreak and hilarity at the same time. Afterwards, when a waitress compliments her mother's earrings, she says, 'You want them? I won't be needing them soon.' Midge's mom gives her daughter her last wishes, including the title direction, as they giggle helplessly.

Using humor to survive, to lift spirits, to poke fun at oppression, Midge touches on issues large and small. I had seen some of her pieces before, like 'An Open Letter to White Girls Regarding Pumpkin Spice and Cultural Appropriation' on McSweeney's and 'Why I Don't Like Pussy Hats' on LitHub, but seeing these in context made them even more funny and effective. Her titles alone ('Wonder Woman Hits Theaters, Smashes Patriarchy,' 'Trump Pardons Zombie Apocalypse') bring a snort. Halloween costumes such as 'Pocohottie' and 'Sexy Geisha' take their hits, as do 'Pretendians' – and yes, she mentions Elizabeth Warren.

Midge takes white women to task for reacting so strongly to the fictional 'Handmaid's Tale' on Hulu while forgetting the true story of Native children torn from their families and sent to boarding schools, the rape and murder of Native women and scores of other abuses perpetrated upon indigenous people. Margaret Atwood has said she modeled her novel after actual events, but I understand Midge's point about the 'cultural and historical amnesia' held by most white Americans.

"Bury My Heart at Chuck E. Cheese's" is timely reading for the fall season, with Midge suggesting 'Politically Correct Alternatives to Culturally Insensitive Halloween Costumes,' and proclaiming 'Hey America, I'm Taking Back Thanksgiving.'  Treat yourself to a fast-moving correction of any vestiges you may have of the stoic, unsmiling Native stereotype and enjoy at least a Tweet or a one-liner from Tiffany Midge. You're sure to learn something as you laugh.