The Remarkable Women of the Mellon Institute, Part I: Dr. Alice G. Renfrew 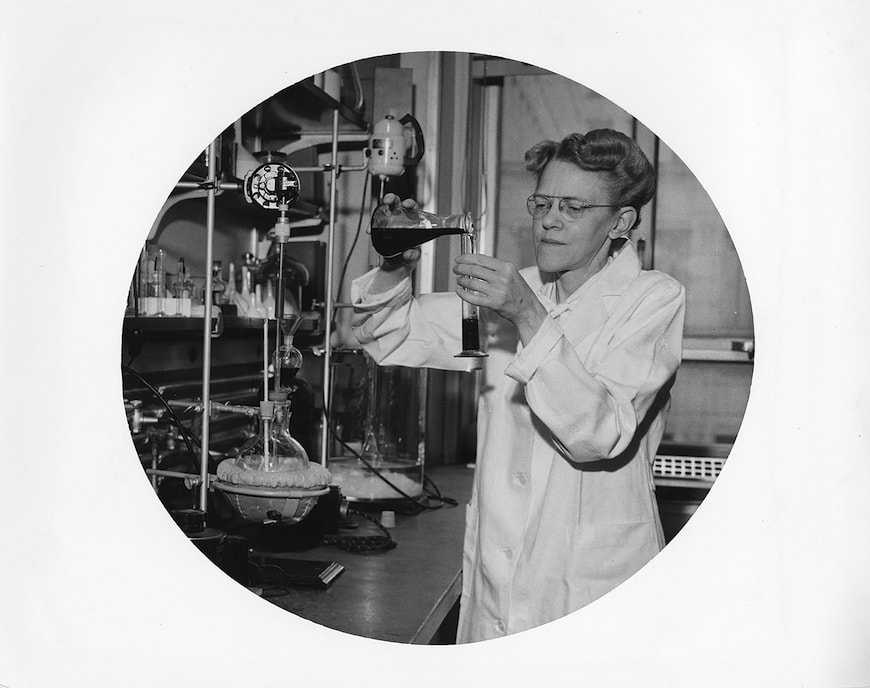 While organizing and preserving the Mellon Institute of Industrial Research papers, I have kept my eyes peeled for women who contributed to the many scientific discoveries made at the Mellon Institute. Nearly 7 months into this project, two women have captivated my attention thus far: Lois B. Whittle and Dr. Alice G. Renfrew.

I was drawn to these women because they both had long tenures at the institute and they each contributed to the success of the Institution in different capacities—one was the Institute's general office manager and oversaw the day to day organization of the institute, and the other was an organic chemist dedicated to fighting cancer and diseases. I have no doubt more remarkable women will reveal themselves to me as I continue to work with the collection and as I learn more about the Institute's history, but for the time being I thought I would start by highlighting Dr. Alice G. Renfrew in what I hope will be an ongoing blog series focusing on the women who helped make Mellon Institute one of the most renowned research organizations of it's time.

For nearly 32 years, Dr. Alice G. Renfrew dedicated her life to cancer and disease research. She held a senior fellow position at the Mellon Institute of Industrial Research at a time when female research fellows were few and far between. She also taught organic chemistry, published numerous articles on her research findings, filed several patents, and spoke often on panels at the local Twentieth Century Club about her work.

Dr. Renfrew's interest in science was sparked in high school when she started leafing through science books at the public library in Manchester New Hampshire. When she enrolled in college at Mount Holyoke in 1917, her interest in science flourished and grew under the guidance of Mary Laura Sherrill (1888-1968), the head of the chemistry department at Mt. Holyoke, and Emma Perry Carr (1880-1972), a pioneering physical organic chemist. Both were recipients of the Garvan Medal, an award that recognizes the accomplishment of women chemists offered by the American Chemical Society. Dr. Renfrew received her bachelor of science in 1923 from Mount Holyoke, and continued her studies at Yale University, where she completed her doctorate in 1927.

After earning her doctorate, she secured a prestigious three-year National Tuberculosis Association fellowship at the Sterling Chemistry Laboratory at Yale. There she worked alongside Dr. Treat B. Johnson and published several papers on the chemical studies of the tubercle bacteria. 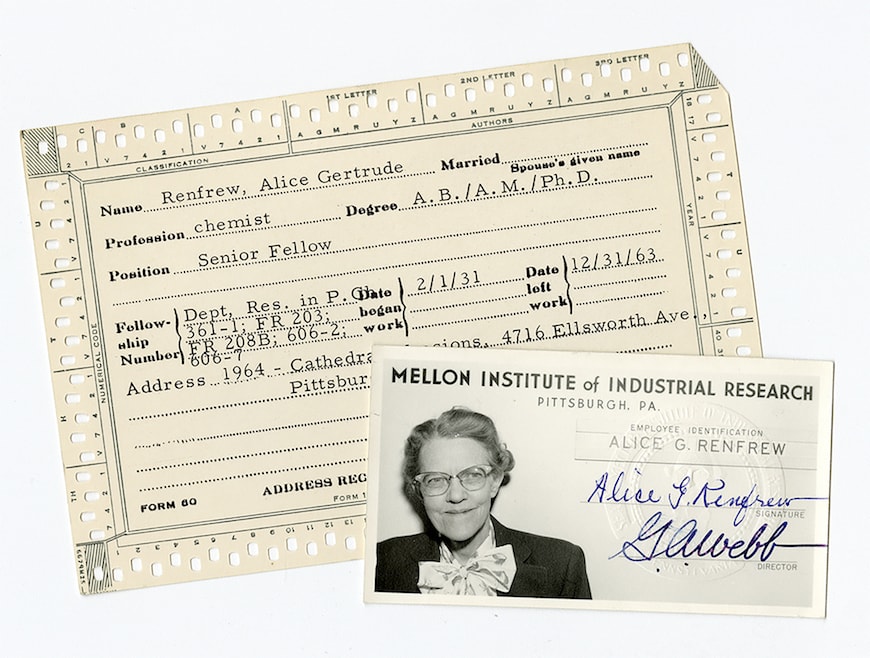 The department was lead by Dr. Leonard H. Cretcher and, according to the January 2, 1964 issue of Mellon Institute News, their primary concern was with the structure of carbohydrates. Soon after Dr. Renfrew joined the department, they started collaborating with Dr. MacLachlan of Mercy Hospital on the use of 'Compound 71' (hydroxyl-ethylapocupreine) as a treatment for pneumonia.

Parke, Davis and Co., one of the pioneers in medical chemistry at the time (now known as Pfizer), took over the department in 1952 and established the Medical Chemistry Fellowship. The main focus of the fellowship, according to the Mellon Institute's 1952 Annual Report, was the synthesis of agents that might inhibit cancer growth. There was also an emphasis on chemotherapy and the preparations for compounds for combating viruses and tumors.

In 1948, the Pittsburgh Post-Gazette featured Dr. Renfrew as the Women of the Week. In the article, she talked about how much she enjoyed living in the Cathedral Mansions on Ellsworth because it was within walking distance of the Institute and she could go there 'at any hour to follow a reaction'. It also noted that outside of work, her interests included driving a car, vacationing in New England, meeting the many visitors who come to the Mellon Institute from all parts of the world, music, books, and book shops.

In 1952, her alma mater Mount Holyoke honored Dr. Renfrew for her many achievements stating, 'Your research has led to the discovery of effective agents in the treatment of pneumonia, in the development of antimalarial, [and] in the problems in anemia.' 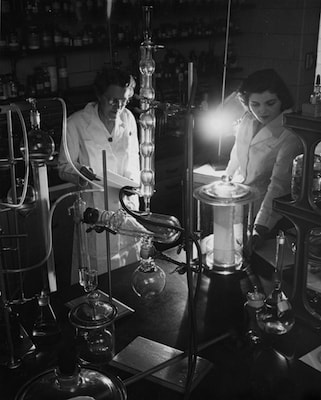 Throughout her lengthy career, Dr. Renfrew was a Member of the American Chemical Society, the British Chemical Society, the American Federation of Biological Societies, the American Association of University Women, and Sigma Xi.  Upon retiring in 1963, the editor of the Mellon Institute News noted, 'Alice is a very modest person and preferred not to talk about any of her accomplishments except in so far as they reflected on the success of the group with which she has worked.' She also stressed that she enjoyed working with all of her associates throughout her year at the Institute.

In 1967, a couple of years into retirement, Dr. Renfrew was selected as one of the Distinguished Daughters of the State of Pennsylvania. In a Pittsburgh Post-Gazette article from that same year, she said she fills her leisure time with reading something other than scientific studies and reports, studying Russian—which she began pursuing after World War II when she started translating important chemistry works into Russian—and volunteering once a week as a receptionist at the Red Cross. Dr. Renfrew passed in 1991 in Longwood Florida at the age of 92, but she will always be recognized for her contributions to the field of organic chemistry.

If you have more information about Renfrew or another remarkable woman from the history of Mellon Institute, we'd love to hear from you. Otherwise, check back again soon for The Remarkable Women of the Mellon Institute, Part II: Lois Whittle.

To learn more the Mellon Institute of Industrial Research, check out previous posts on Scotty Tales, the university archives blog. And if you have any questions, don't hesitate to ask! Contact the University Archives at archives@andrew.cmu.edu or 412-268-5021.